Anyone who knows acclaimed indie band Kid Canaveral will be familiar with the richly-accented vocals of David MacGregor. 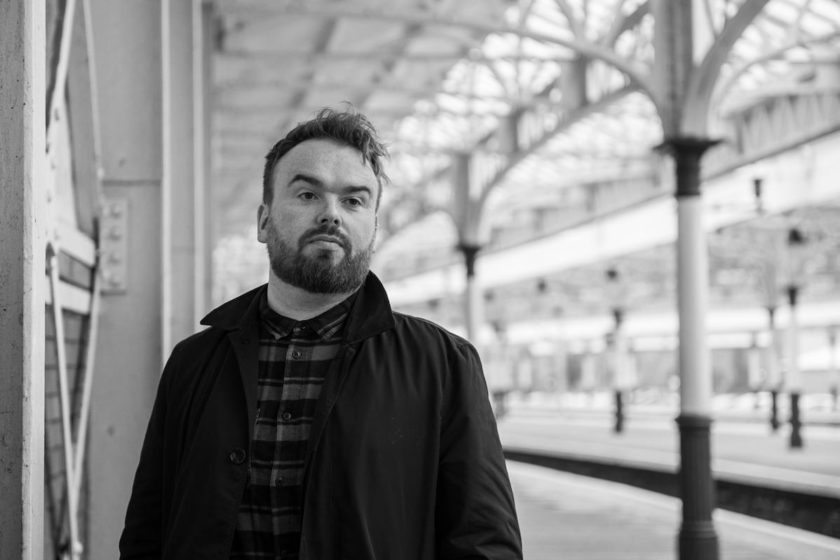 However, on his first solo record the frontman has taken things a stage further, with a distinctly Scottish-sounding release under the name Broken Chanter.

“The folk/Trad musicians that I know would certainly raise an eyebrow, were I to claim it was… not that there’s anything objectionable about that,” he adds quickly, “They’re folk songs inasmuch as they tell their own stories.”

Kid Canaveral, particularly on their Scottish Album of the Year-longlisted release ‘Now That You Are a Dancer’ and its follow-up ‘Faulty Inner Dialogue’, were never afraid to experiment and move away from the indie jangle of their live shows, and Broken Chanter similarly treads some sort of line between alternative and more ‘traditional’ sounds.

“Yes, there’s acoustic guitar on this record,” MacGregor agrees, “but you’ve got (drummer) Audrey Tait hammering away underneath it, synths
swirling around it, and Gav (Prentice) with a spidery proto-metal riff climbing all over it, at different points on the record.”

It’s clear that MacGregor has been fired up with enthusiasm for the new release, some time in the making following Kid Canaveral’s last long-player from 2016.

“When we wrapped up touring for the last record we were all a little burnt out,” he admits.” Kate (Lazda, KC’s guitarist and vocalist) wanted to take some time off and encouraged me to use my enthusiasm to make another record to do so, but under another guise.”

And that new persona meant a completely new approach, MacGregor isolating himself in the highlands in the middle of winter, “emptying my head of all the ideas I could shake out.”

Instead, the ambient sounds of the Ardnamurchan peninsula (plus the odd Japanese commuter train) add to the ambience of a release that is distinctly Scottish, if less the alt. pop of his regular band.

“I asked Gal (the album’s engineer/producer) to stop us immediately if anything sounded like Kid Canaveral,” MacGregor says. “Beyond my voice, obviously.” And it seems that aim has been accomplished, the self-titled record shorn of the indie pop jangle fans might expect.

“It would have been strange to keep going in the same way as with Kid Canaveral, just minus the rest of the band. I wanted to explore different ways of recording and not be constrained by any external expectations. I took time to explore more textured, atmospheric sounds, that in some cases are incorporated underneath songs and in other places were the main focus in parts.”

And while Jill O’Sullivan provides violin alongside stellar backing vocals across the album’s nine tracks, there is a truly ‘traditional’ curveball in the appearance of Kim Carnie – familiar to some as a TV presenter, or from ‘Outlaw King’, but to music fans a finalist in the BBC Radio Scotland Young Traditional Musician a couple of years back.

“Kim’s got this beautiful, crystal-clear voice,” he enthuses, “but it’s juxtaposed with Audrey’s beat, a fuzzy Moog synthline and droning electric guitar played with an e-bow.”

I put it that to MacGregor that Kid Canaveral fans may enjoy something a little different.

“I think some people have been thrown by there being a song in Gaelic, too. They instantly think ‘folk’. But it’s not really a trad tune, is it?” Not in that sense, I agree.

“I definitely agree that there is a lot more ‘musical ground’ covered than on any writing/recording that I have previously done.”

Well, yes, although the fact that the Gaelic lyrics are penned by MacGregor may surprise a few.

“I wrote ‘Mionagadanan’ as a way to kick-start my learning,” he explains. “I’d been trying to get started for years, so I enrolled in Sabhal Mòr Ostaig distance learning, and got to work on the song while I waited for the course to start.

“After I was happy with a draft I got my sister-in-law to check it for anything terminally stupid or offensive. I’d gotten away with it for the most part.” And hopefully making a few new fans rather than putting anyone off?

“It’s a beautiful language in which it was a joy to write. Kim came in and absolutely nailed her vocal on the first take. “Hopefully the folk who find bi-lingual road signs dangerous won’t hurt themselves if they look at the back of the record in a shop!”

This article originally appeared in the Donside Piper.