The star studded celebration brought together the biggest and brightest talent from all areas of the Scottish music industry in support of the charity with performances from top acts including Admiral Fallow, Nina Nesbitt, and GUN. 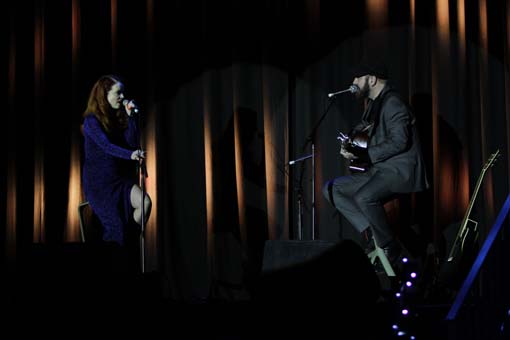 The night opened with a live performance from Edward Reid and Lanarkshire theatre group the Ups & Downs who gave their own rendition of ‘Born This Way’ for an audience of performing artists, celebrities and VIP’s. The Ups & Downs theatre group have been offering young people with Down Syndrome an encouraging and creative outlet for 19 years. Edward has been patron for nearly 3 years and works with them every year as a guest performer for a show that runs for a week each March.

The audience of over 500 were treated to a performance from Scottish Hip Hop Act Stanley Odd (pictured below) who won 2013’s Creative Scotland Big Apple Award, which saw them travel to New York with Nordoff-Robbins Scotland to perform six gigs over six days during Scotland Week 2013.

Glasgow was recently named as the ‘Best place in the UK to discover new music talent’ with the city hosting on average 130 music events every week (more than any other Scottish city) generating an estimated £75m to the city’s economy each year.

A highlight of the night was the long awaited reunion of Garbage’s Shirley Manson and her original bandmate Martin Metcalfe (pictured above) who played together in the iconic band Goodbye Mr. Mackenzie. Manson also took home the Sir Reo Stakis Foundation Innovation Award.

World renowned song-writer John McLaughlin won the Sunday Mail Living Legend Award for his accomplishments in song-writing and producing, having worked alongside the likes of Busted, Westlife, 5ive, Lulu, Blue, 911 and Echo & The Bunnymen.