Hear the name Monica Queen and you may think of her work firstly with Thrum, or more recently Tenement and Temple, but for a certain section of indie music fans she’s the voice on one of Belle and Sebastian’s most-loved tunes, ‘Lazy Line Painter Jane’. 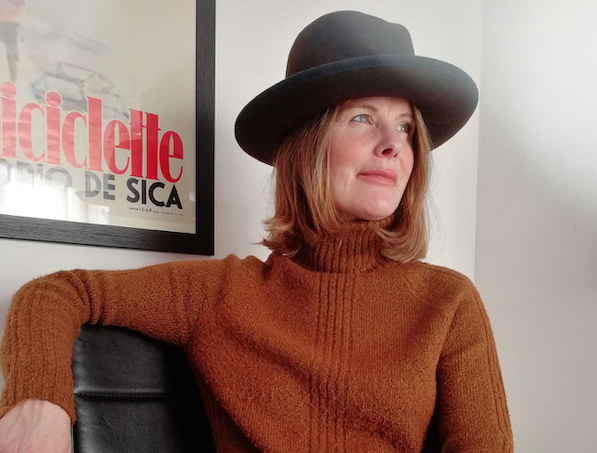 However, as well as several well-received solo releases, she has also worked with the likes of Snow Patrol and James Grant, and it’s quite likely that she will now become known for anther collaboration – with Chris Connelly of Finitribe, Ministry and Revolting Cocks fame, on new album ‘The Birthday Poems’, which tells the tale of Orkney-born poet George MacKay Brown and his muse Stella Cartwright. Betty Mayonnaise found out more…

• Before getting involved with this project, what did you know of Chris Connelly, and how did he persuade you to collaborate?

MQ: I knew of his bands but not him personally. I get asked to contribute to a lot of projects and I take each one purely on the merit of the material. Chris sent me some of his ideas and I immediately connected with the concept, and the ambition of the music. I could hear Bowie and Bush so I was in. An opportunity to explore that side of my voice was irresistible and the story was an interesting one one to tell. It felt like it spoke to this time.

• Is this a new type of working for you, and how did you approach it in terms of the character you are singing about?

MQ: No. I am always playing a character in songs. A lot of my own work is quite emotional and I need to inhabit the characters within it to be able to tell the stories. So this was just another character. Different only in the respect that it is the same person throughout the album. My inspiration first and foremost comes from the music so I let that inhabit the songs then the words will find their place.

• How did the collaboration work in practical terms – and what were the easy and difficult aspects of it?

MQ: Practically it was fine in this age of the internet. Johnny (my producer) would liaise with Chris Bruce (Chris’s producer) on the technical side and of course we’ve all been communicating through technology of late. Sometimes when making a record there are moments when you need to be physically together, when it’s difficult to get across what you want. Chris was immediately excited by my contributions so we never really got into that area. Listening back now I can see why. I think we got it mostly right and don t think I would change too much.

MQ: The plight of women in art has been highlighted a lot in recent times but there was always an opportunity for great women to rise. One of my favourite artists is Gentileschi who was the first woman to become a member of the Accademia di Arte del Disegno in Florence and was a working artist at a time when this was unusual.

Of course she did not quite gain the popularity of the men at this time such as her inspiration Caravaggio but was recognised and of course is now celebrated. Stella perhaps may have had more recognition if she was a man but her main role seems to be as inspiration to the men around her.

Maybe it can help us reflect a little more on the woman’s role. However as I have been given equal billing on this record there are none of those issues at play here.

• Chris was also asked this in his part of the Q&A, but how much chance do you think there is of these tracks being performed live at some point?

MQ: That would be something. Perhaps as part of the George McKay centenary. Who knows in these uncertain times. I think in concept it is more of recording project, however Chris has some dates in Chicago where I think he will be performing some of the tracks.

The Birthday Poems’ is out now. More at thebirthdaypoems.com / chrisconnelly.com and a piece at jockrock.org.