Once Dundee was famous for producing jute, jam and journalism – now it seems it principle claims to fame are producing computer games, music magazines and kick-ass alternative music. The city that brought you Lemmings, Grand Theft Auto and Clash Magazine is currently in the throes of a musical revolution. 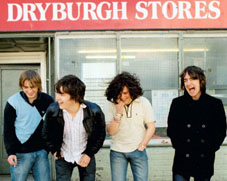 The View you may well have heard of. The Dryburgh foursome’s rise to fame matches that of any indie success story you care to mention. Operating outside of the provincial Scottish press The View erupted fully formed onto the cover of the NME. Love or loathe them, they are difficult to ignore.

Before Pete Docherty, cocaine offences and number one albums took hold though, The View were just another band on 2Thumbs. Granted a daily rehearsal slot at local live music venue The Doghouse, The View found themselves working alongside The Law and Luva Anna. The three bands had a close camaraderie, all three playing the toilet circuit together until the The View’s blast off towards the stratosphere of fame and fortune. The recent Caird Hall homecoming however, found the superstar tradesmen themselves remembering old friends: The Law and Luva Anna were both support acts. The Law are currently signed to Stimulus Records and get rave reviews in NME, whilst Luva Anna have just released their debut EP on 2Thumbs.

Beneath this layer of talent though, lies another rich seam of young, up and coming bands. The Get Downs and Dave?, respectively, have shrugged off allegations of sub-View chicanery to develop their own, unique sound. Elsewhere The Rise have their own brand of dance-rock, whilst The Rail can give the Stereophonics something to chew on with their rock ‘n’ roll bluster. Former View support act Rush Hour Soul make up the rest of this rearguard, with their sharp indie-rockin’ set to reveal Oasis for the bunch of weak livered chancers they are.

Deep under the streets of Dundee though, a few dark geniuses have been brooding for a way to topple this indie bohemoth. Pet Piranha records, run by the longstanding and well respected group Mercury Tilt Switch, aim to put Dundee on the map as the centre of thought provoking music, ploughed straight from the left-field. Stand out bands include Alamos, who have just finished recording their second album with Steve Albini. Ethereal, Liz Fraser vocals abound in The A Forest, their twinkling electronica enough to soothe the most violent of tempers. Other Pet Piranha acts worth investigating include the dark folk-tales of Uncle Fritz, and the primordial grunge of the immortal Spyamp.

The art-rock brigade of the Dundee indie army is well-served by its foot soldiers. The Grace Emilys have a unique brand of skewed pop, reminiscent of The Futureheads when they wrote tunes. The legendary Otterley recently released a new EP, and their mixture of languid guitar and electro-pop is well worth tracking down. The Leatherettes are busy putting the “psycho” back in psychobilly, this demented two piece intent on breaking through to the other side – wherever that may take them. Descartes have been thrilling audiences for a while now with their savage garage rock, and even more savage haircuts. Former Magdalen Green frontman Mr Gavin McGinty is currently indulging his Dylan fetish, to good effect – music made for lazy summer evenings. Last but by no means least we have Juliet Kilo: boasting TS Eliot as an influence it’s clear they won’t sound like The Hoosiers. And they don’t, their art-rock aimed as much at the mind as the body. 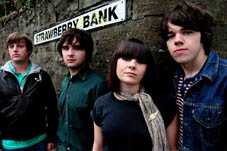 Over them all, though, stride The Hazey Janes. The musical offspring of renowned local tunesmith Michael Marra, the Hazeys have embarked on a near Marra-thon journey that has taken them from in-store sessions at local record store Groucho’s, to recording in Spain. Their blend of Alex Chilton meets Gram Parsons harmonies would soundtrack the perfect world – or the average day in Dundee.

So there we have it – a quick musical journey through the city of Dundee. Re-discover the city of Discovery, and the ever-changing, all-inclusive atmosphere of creativity it has fostered.