2019 marks the tenth anniversary of the release of De Rosa’s ‘Prevention’, their second for Chemikal Underground and the last before the band went on hiatus for several years.

To mark the anniversary of the release, the band released an album of downloads of demos from the record back in March. Whilst the demos certainly don’t replace the album, they’re a fascinating insight into the development of the songs that did make the record.

The band conclude the anniversary year with a special one-off show at Glasgow’s CCA on Saturday 14th December.

Ahead of the show singer/songwriter Martin John Henry looked back on the creation of an album that many consider the band’s finest.

“These songs were all written between my bedroom at home in Bellshill, shared flats in Glasgow and a rehearsal studio in Hamilton.

“I had gotten more into recording so some of the songs like ‘A Love Economy’ were well fleshed out on multitrack.

“After our first album came out I got a ripped off copy of Ableton Live recording software and it completely changed the way I compose and arrange stuff. I loved the contrast of the folk style guitar parts I was making with the software instruments.

“It was probably Live that gave Prevention its mix of folk and electro since that particular recording software is aimed at electro music makers.”

‘Prevention’ is definitely a more eclectic mix of songs than debut ‘Mend’ which made it much harder to devise a tag-line for the record. Martin says that it had always been his long term ambition to make such a record.

“When I was at high school, I started a band with Chris Connick and during the only conversation about intent that we ever had we both agreed that we’d love to be in a band that would be able to do anything. We were always really bored by albums that presented a dozen songs – all on the same theme or with the same sound. How dull is that, we thought?

“These days I have more of an appreciation for musicians who dedicate themselves to refining a sound, especially over an album. I’m not sure I have the concentration or patience to make work like that though.”

Martin reckons now that the album very much benefitted from being recorded over a concentrated time.

“’Prevention’ is the only record we did almost in one run of about 6 weeks. I think that might have been split into two bursts of 2-3 weeks each. We worked intensely at Chem19 studios which is in an industrial estate in Blantyre. It’s the kind place where you really just stay in the studio since there’s nothing exciting nearby to do.”

The band very much expanded on their range of influences for the record as Martin recalls.

“I think ‘Prevention’ is the sound of a band holed up, considering, experimenting, layering up. We were very into Kate Bush, Depeche Mode, the Blue Nile, Red House Painters and Sophia and were very keen to present a more controlled, refined sound for the second album.”

In addition to that international range of influences, Martin admits that he was also influenced by acts closer to home.

“I always tried to avoid listening to too many of my peers in Scottish music so as not to copy anyone, but I was definitely very much influenced by all the famous Chemikal bands. I probably tried to copy Malcolm (Middleton) and Mogwai a fair amount.”

“I remember writing A Love Economy because it was my ‘big breakup song’ and it took a fair amount of development to strike a balance in the lyrics.

“That moment of hurt is a gift for a songwriter, but you don’t see it when you’re in it. I’d never write something like that these days, even if I was to be brutally dumped. I’d probably just hit the bevvy.

“For the album version the band got the dynamics just right. It has a nice build and rise in tension without losing the plot. Robert from Life Without Buildings added some drone guitar to add to this feeling.”

Nocturne For An Absentee

“I wrote the lyrics in a flat in Dennistoun in Glasgow’s East End which had a great view over the city and Lanarkshire. It was a weird time for me as the relationship I was in was falling apart.

“I spent my days looking at that view and dreaming of being part of communities that care and nurture. My nights I spent in a fair amount of misery.

“I made this song while playing with MIDI instruments and learning about quantisation. I loved that I could quickly play in synth or drum loops and then let the computer decide where to place the notes. As an indie folk guitarist this was a revelation to me.”

It Helps To See You Hurt

“The demo sat around for a couple of years before we revisited it. In that time we grew to a four piece, toured a lot and matured a bit. So, the song gradually developed through rehearsals and concerts to became the slower, more textured version you hear on Prevention.

“We didn’t yet have our keyboard player Andy when the final version was recorded, so Barry (Burns) from Mogwai kindly wrote and played the amazing piano parts.”

“This was one of the first demos I made with Ableton Live, which is a mainly a tool for making electronic music. There’s an even earlier demo with mumbled lyrics which has loads of electronics – vocoders and stuff.

“The acoustic guitar and vocal demo I put on the demos and out-takes album was the second demo I made in order to finalise the lyrics. The final studio version is a blend of both demos with some extra parts the band added.”

“This is an example of a song which I wasn’t sure about for De Rosa. I thought the rhythm was too swingy and I thought it was a little bit too colourful to fit with the rest of ‘Prevention’. It has a bloody accordion on it.

“I took the theme from Thomas Struth’s book, ‘Still’. I’d say I’m just as influenced by photography as I am music. Our first single ‘Camera’ was based on a work by photographer Robert Frank.” 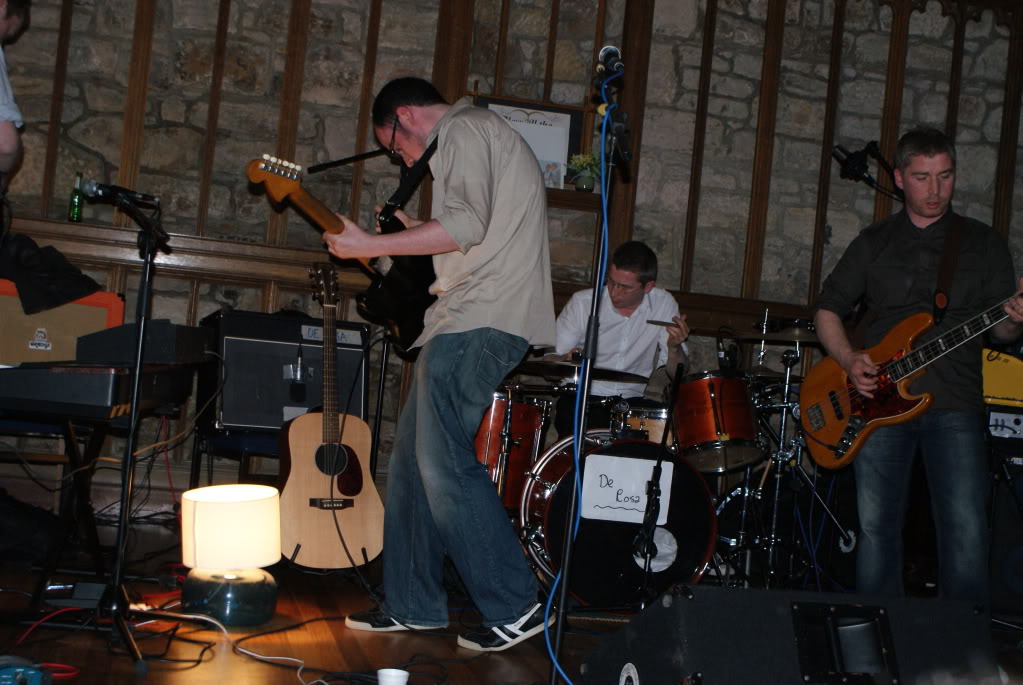 “I was asked in 2006 to write a Christmas song for some emerging artists playlist on the BBC website. But they said keep it clean. I wrote Under the Stairs especially for this, using my own dialect, including the word ‘piss’ and connotations of substance abuse and even violence. The playlist emerged soon after I submitted the track, sans De Rosa. Silly me.

“So we recycled it, changed ‘Christmas’ to ‘Winter’ and re-recorded it for ‘Prevention’. People really seem to like that tune. I think it’s a bit of a heavy nod to Malcolm Middleton’s ‘Into the Woods’.”

The demo of ‘In Code’ was really just a sketch, not fleshed out at all. I remember that it felt raw sending it to the guys.

“With the demo being so bare bones, the more the others added the better it seemed to get.

“The longer, slower ending was definitely inspired by our time playing concerts with Mogwai. In the background there’s a recording of a woman who charged into a gig in Italy while we were playing and told everyone to shut it down or else she was calling the police.”

“The demo is just me playing acoustic guitar and a cello effect on keys. The studio recording of ‘Swell’ features our former keys player Andy Bush. He added so much to this song – piano, organs and vibraphone at the middle section.

“Also, a bunch of folk that I love sing at the outro including my sister Leigh and my wife Morven.”

“’Flight Recorder’ and ‘Chip On My Shoulder’ (not to appear until third album ‘Weem’) were written around the same time and have similar chords and feel. The ‘Flight Recorder’ part was deemed strong enough to develop for ‘Prevention’, but it needed to go somewhere else.

“So the ‘Home, a shelter…’ and ‘I’m Temporary…’ parts were taken from the end of the ‘Chip On My Shoulder’ demo and attached to the end of ‘Flight Recorder’. What was left of ‘Chip’ was developed and recycled later for ‘Weem’.“

“Tinto is a hill that sits way up in the Clyde valley and is a sort of hub for me imaginatively, even still. I know that I’m not alone in experiencing the benefits to mental health of climbing a hill in a beautiful place. This song is one of these things. Sung from the core.

“It is definitely the final destination of ‘Prevention’, which starts from a romantic break-up in Glasgow and ends up at the cairn on Tinto, in deepest Lanarkshire. It’s the point of letting go of all this young man’s turmoil. Thank goodness.

“When I met Alasdair Gray he asked me about that song and told me of his fondness of the hill, so I knew I had chosen the right place.” 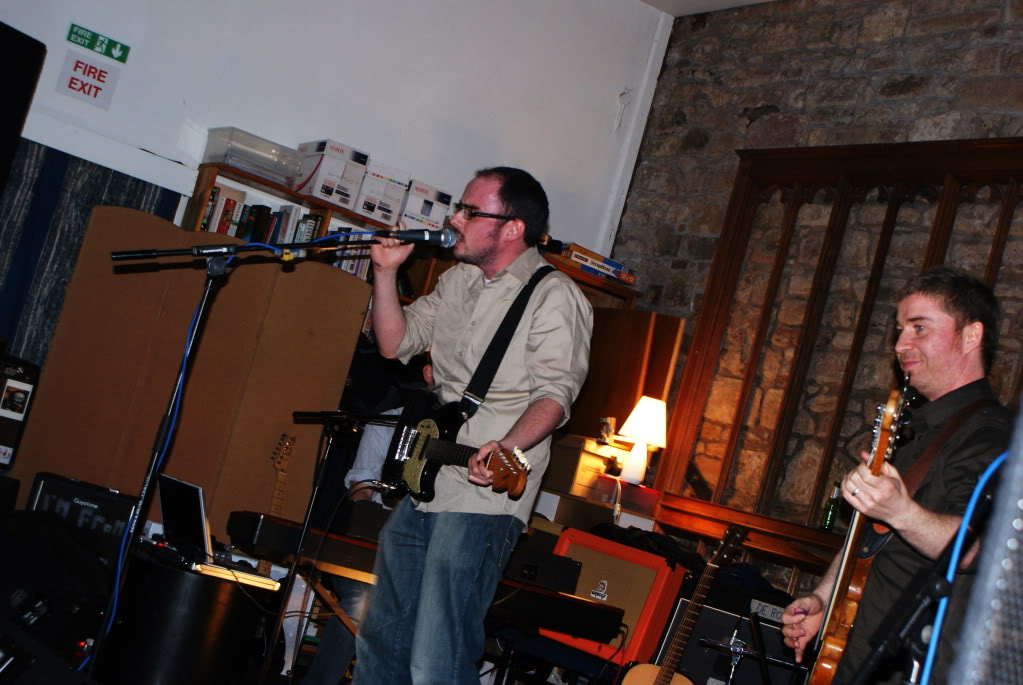