Colin MacIntyre has a penchant for peculiar instruments. He tells me his new album The Water features a harmonium. “It’s a kind of keyboard which sounds similar to an accordion” he explains. “You use a pedal to pump wind through it, so it’s a great way of getting some exercise in the studio.” Apparently the model McIntyre owns is particularly old. “It’s probably got mice running around in it” he says. 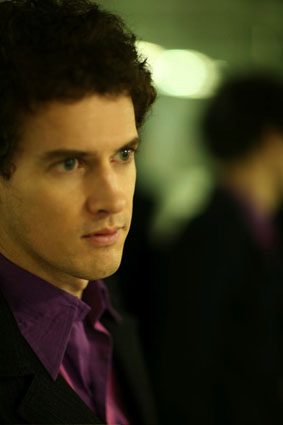 McIntyre rose to prominence under the moniker of Mull Historical Society, but has decided to release The Water under his own name. As Mull Historical Society, he was a one-man band: writing, producing and playing all the instruments himself. While The Water is a natural successor to previous Mull albums in terms of songwriting, McaIntyre decided to pass over production duties to someone else.
“I worked with Nick Franglen from Lemon Jelly which really helped me find the sound I was looking for” he says. “It’s nice having someone else there to perform to in the studio as well.” Franglen and McIntyre found they both shared a passion for experimental recording techniques.
“We recorded with me singing in the toilet” recalls MacIntyre. “It was a lot of fun.” In addition, the song ‘The Water’ utilised some cheese-grater percussion. “Whenever I go to friends’ houses now I’ll probably end up stealing their kitchen utensils to see how they sound in the studio” he comments.
Although MacIntyre played a variety of instruments on the album, there was one he kept going back to. “I realised guitar is my first instrument” MacIntyre says. “I first picked-up a guitar when I was a six year-old kid and I’ve never had any lessons, which maybe explains why my playing is a bit unorthodox. Now I’ve got this fat Yamaha guitar which makes these great noises. It’s really added balls to the songs. Now when I play live I can bring out something in the old songs that wasn’t there before.”
It has been two and a half years since MacIntyre released his last album ‘This Is Hope’ but he believes The Water’s gestation period has been justified. “It’s the best album I’ve made” he says. “Having that time gap since the last one has meant I’ve had more of a chance to work on songs and ideas. I consciously decided to make The Water a more sonically direct album. Sometimes with pop songs you need to realise that less is more”
In recent years MacIntyre has spent a considerable amount of time travelling in America, visiting New Orleans and New York in search of songwriting inspiration. “I’ve been lucky enough to visit different places to work on songs, but the last thing I want is to put out a ‘tour bus diaries’ kind of album” he says. “It’s more important for me to look at specific themes and issues. Sometimes being away frees your mind and allows you to focus in on people’s own individual stories”
During the recording of The Water MacIntyre became possessed by one story in particular, which emerged in the form of a novel. ‘Notes to an Unborn Child’ is about a man who believes he’s 62; after years of living in London, he goes back to the small Scottish island he comes from and uncovers secrets from his past.
“I feel I’ve found my voice with this novel” says MacIntyre. “I’ve written three other novels which are unpublished, but this is the first time I’ve written about what I know. To be honest I think of this one as my first proper novel- I got the same feeling from writing it that I do from making music.”
One of The Water’s standout tracks is Pay Attention to the Human, which features a spoken-word piece from Tony Benn. MacIntyre read the veteran politician’s diaries as a student, and decided to e-mail Benn’s publisher to ask if he wanted to appear on an album. Benn agreed and a week later he e-mailed a poem in response to the question: ‘What does Pay Attention to the Human mean to you?’
Benn’s recital of the poem was recorded in his own home by MacIntyre, who is delighted with the results. “I think his crackling voice sounds great” he says. “I’ve always admired Tony Benn’s consistency as a politician and I respect the fact that he doesn’t patronise anybody. I think the song encapsulates what he’s campaigned for all his life.”
MacIntyre now appears in Benn’s new volume of diaries and was recently invited to the Houses of Parliament for a guided tour. “We had a cup of tea together and watched a parliamentary debate. In return I gave him some Tobermory fudge” he says.
From Mull to Westminster, MacIntyre’s career has followed an interesting path. Now he’s looking forward to taking The Water out on the road. “I’m planning to tour in April and hopefully I’ll get to a few festivals in the summer. It would be great to play T in the Park again!” he says.
MacIntyre is also confident that his decision to return under his own name won’t confuse people. “Mull fans will know who I am, and those who don’t will hopefully find out! I’ve put a lot into this album and I just want to get out there and let people hear it.”