Indie legends, national treasures – whatever way you look at it, Edinburgh-based four-piece ballboy, despite their longevity in music terms, can always be relied on to produce sterling tunes coupled with wry observational lyrics. 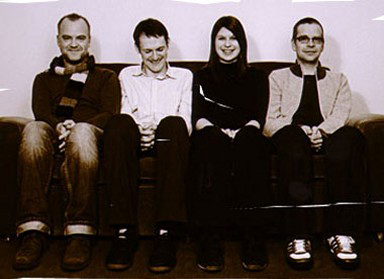 However, the band have been absent from the airwaves / inky pages / stages of late save for the occasional solo performance by mainman Gordon McIntyre.

ballboy-watchers and fans of the higher arts may well be aware that Gordon has been otherwise occupied, scoring for the theatre – Midsummer has now completed over 250 performances, and is about to play to New York as well as spawning versions by other companies in 9 different countries.

Despite this, and working on another play, the band have another album in the works – you can hear an exclusive track on the forthcoming is this music? podcast – and of course, the full band play for itm?’s 10th birthday show in their hometown on December 13th. And, Gordon found time to answer a few questions for us…

So, how are you balancing the play and theatre work with regular ballboy songwriting?

“Generally speaking it works in 3 ways. Some songs are written specifically for the plays – either to fit the story or the feel of the piece. Some songs are written which could fit the play depending on how it develops or could be ballboy songs depending on how the feel of the album develops. The third type are clearly unrelated to the plays and are typical(?) ballboy songs – whatever that means!”

So it seems you can find the time to do both? But is there not a temptation to keep a good idea back for one or the other? Or are the ‘soundtrack’ pieces less suitable for song-based efforts?

“Time is always an issue – the more projects you do the more the rest of your life gets squeezed and that can be difficult. It’s worth it in the end though – Midsummer passed its 250th performance on the recent Australian tour and is about to head to New York in 2013. It’s been more than worth the effort and time involved.
The songs for the plays are actual songs, but I do the soundtracking as well. Most fun I had with the Midsummer soundtrack was making the mock-Hollywood trailer for an action movie.

And since you ask, ETA on the new ballboy album would be Summer/Autumn 2013.”

You are also, I think, putting out your own records – that must eat into your non-questionnaire-answering time. I’m guessing you have no plans to do anything more than your own releases, but anyone you would put out if you could? Ok, make it a fantasy signing, anyone from any era or genre.

“I think we would love to put out other bands on our label and we’ll probably look to develop this in the future. I’d have loved to be putting out the Eagleowl album and would’ve liked to put out Randolph’s Leap, but Fence Records will do a much better job for them than we would have!”

Finally, a rare full band show – how hard is it to get back into playing live if you’ve not done it for a while? (I guess we may find out soon!)

“Nah – it’ll be a doddle! I’ve played plenty of acoustic shows including the Queen’s Hall with Withered Hand and Darren Hayman so I’ll be fine – it’s those other ballboys that have been halfway round the world that’ll have to shake off the rust and dust.”

ballboy – all 4 of them – play at Edinburgh’s Electric Circus, as part of itm?’s 10th anniversary celebrations. We See Lights and Adam from We Were Promised Jetpacks are also on the bill, with Scott from Frightened Rabbit DJing.

Keep up to date with the latest (or not) at www.ballboymusic.com