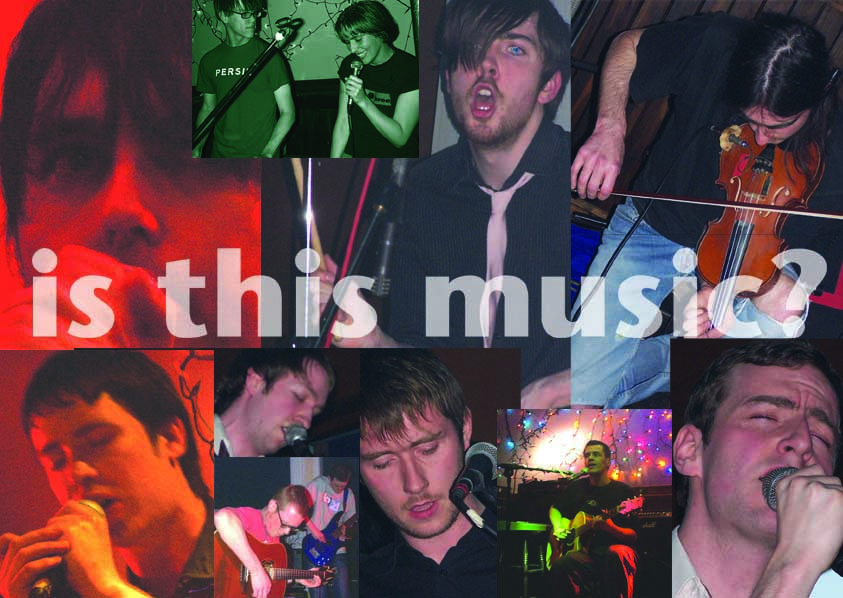 How excited was I to receive a copy for review of an album by the Bacon Brothers, Biffa Bacon and his wee brother Ker Pow or whatever END_OF_DOCUMENT_TOKEN_TO_BE_REPLACED

An all too balmy, more middle eastern, heat pervades Sauchiehall St as we get off the bus and plough into Nice and Sleazy – the sheer muckiness of the place, normally best forgotten in the darkness, very apparent, in the blazing sunshine of 1945 on this Saturday nicht. END_OF_DOCUMENT_TOKEN_TO_BE_REPLACED

I kind of expected that if The Bronx, a redoubtable NY outfit with good hard rocking credentials END_OF_DOCUMENT_TOKEN_TO_BE_REPLACED

If it ain’t broke, don’t fix it…. don’t flip with the formula… making people deaf since 1987… of this later, but first off, the support.

Veterans of seven albums, I am told, these guys let the music speak for itself. Picked to support Mr Mascis et al, they may have been selected to make him look glamorous or charismatic. Fronted by a man who (and this is true) appears to have an “indie combover” and looks like Chris Martin’s slightly less “with it” American uncle, they rock out in a very pleasurable way.

A five-piece, Mr Charlton on lead guitar/vocals, a bassist, two other guitars and a bass, it’s sort of old-school math rock, rhythmic and a bit of stop-start but very very heavy, the bass rumble competing with any underground train. No titles but some loved tracks, the three quarter full audience (and yes, it is 95% male, surprising thing that) react with recognition to at least several of the 7 or 8 tracks played tonight.
Tendencies to almost Half Man Half Biscuit-esque quirkiness in the vocal content and delivery are tempered by the sheer volume and riffage deployed and the complexity of some of the chord changes. Played by people who look like, say, the Kings of Leon, this lot could go far but I think the radio may be the best medium for these guys. A bit cruel but there you go.

So, cast your minds back, and the last time Betty saw the Dinosaurs (as they are not ever referred to, sorry) it was at the notorious Rollercoaster tour in the Red Shed (’91 I think? – ask your undertaker) where they played after Blur and blew the amps after 15 minutes, causing a lengthy technical hiatus and a few irate punters -ah, happy days…

I remember them as chaotic, shambolic and sullen but that just may have been the circumstances; however, they won me over tonight with pretty much the same sound.

It was 1987 when Dsr Jnr first crawled out of Boston, Masschusetts, and established their reputation for squalling feedback, out-of-tune vocals and personal tensions within the band. The classic ‘Freakscene’ was a (TM) “Indie Classic” and set the template for several careers, in Scotland the Fannies and in the US you’d have to think that Nirvana were influenced by the three-piece thundering setup. A few well-received albums and they kind of flatlined, coming to a “hiatus” before reforming in 2005. A visit to Scotland a couple of years ago I think, before this one, with the “classic” lineup of Mascis on guitar, Lou Barlow on bass and some vocals and Murph on drums, except Murph replaced tonight and on other dates by a young whippersnapper called Kyle (“one of the family” according to J, acquitting himself very well and possibly increasing the pace with his youthful energy – Murph’s jaiket may be on a shuggly peg…)

Storming through a selection of sounds from umpteen albums in an hour-plus set, the main things tonight are:

– the songs remain the same, the formula, walls of guitar, thunderous drums and a bass thrashed to I’m not sure what. Three-piece dynamics are a combination of the Jimi Hendrix Experience, Nirvana and possible Traffic, unreconstructed noise which borders on the metal while staying inside the 3-5 minute tight sound format. J deploys several guitars and effect pedals for controlled feedback but mainly just massive riffs, although a couple of more Rickenbacker picking moments suggest REM during a really bad acid trip. Numerous solos from J but they don’t outstay their welcome, occasionally indulgent but he is a maestro at this.

Several crowd favourites – ‘Feel The Pain’, ‘Freakscene’ – are dispatched at frightening speed, along with songs from most recent album Farm along with, well not sure quite what – there is such a big back catalogue.

J, looking like Garth from Wayne’s World with his blonde/white tresses (surely a hairband would be a good idea, don’t they get in the way of the guitar strings, maaaan?), is very polite, informs us he had a good day in Glasgow and “bought a new amp” (which is presumably on stage tonight, deafening us even more). Lou furiously attacks the bass, sings a couple of numbers and challenges the audience as he comes on at the encore, “are you really that bothered about an encore or what?” Possibly as a result of this, there is only one number in the encore and then they are off, I guess to figure out more ways of deafening Glaswegian males.

We enjoyed it, and so did they I think, and there’s more than a few Glasgow riffers have learned from these old, still there after all these years, masters.

Well – “a concept album about Aberystwyth”, at least the press release said with some humour “come back guys, was it something we said?…” END_OF_DOCUMENT_TOKEN_TO_BE_REPLACED

This is quite something. An Edinburgh-based three-piece who have some storming melodies, rousing choruses and sophisticated song structures (and yes I did read the press release but not quoting verbatim), they could (and are already) going far. END_OF_DOCUMENT_TOKEN_TO_BE_REPLACED

It was sweaty, says Betty, but LCD slayed them tonight. END_OF_DOCUMENT_TOKEN_TO_BE_REPLACED

Arriving around 8pm I was able to catch the latter half of the support band, the Factory Floor. In a prelude to things to come the stage looked like an extension of the BBC Radiophonic Workshop, with vintage analogue equipment all over the place. END_OF_DOCUMENT_TOKEN_TO_BE_REPLACED

So here we are, not at the main ex-cinema upstairs but in the bar, and despite previous quips about sticky floors etc it looks pretty classy (or classic?). END_OF_DOCUMENT_TOKEN_TO_BE_REPLACED

Is this some kind of a joke? I kind of hope there is some comedian behind this, taking the p*** but I fear not. END_OF_DOCUMENT_TOKEN_TO_BE_REPLACED