If you purchase the new Aidan Moffat album you’re in for a surprise – there’s no sign of the former Arab Strap frontman’s dulcet tones on this collection of eight instrumentals. 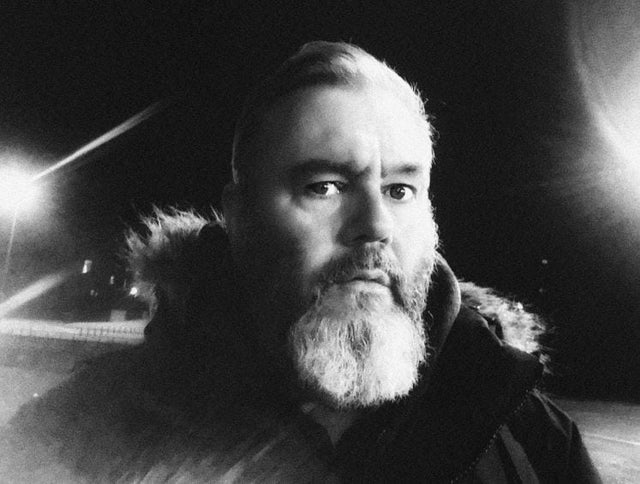 However, if you’re to listen to the promotional release for the record – on which he goes under the alias Nyx Nótt – you’ll hear Moffat chirp “Wakey wakey, nighthawks” through a crackle of static before providing DJ-style links between each of the carefully-crafted sample-driven pieces.

Which is why we start chatting about radio.

“I had John Peel on every night of the week,” admits the Falkirk-born musician, “and he was single-handedly responsible for me failing all of my exams.”

“Every night of the week I’d have my finger over the record button for whatever session he had on that night.”

“Daytime radio’s more geared towards people who work and travel – a broader audience, you do have to make more effort to listen at night, so it’s a smaller and more dedicated audience.

“I’ve never been good at sleeping, all my life,” he continues, “usually I’m going to bed at half-past two, but I still need to get up at 8 to get the kids to school.

“I think it’s a scientific fact that the less you sleep the shorter you’ll live,” he continues, “I’m starting to think I should catch up on my sleep, but maybe the damage is already done! Bring it back from the brink. Maybe my card’s marked already!”

A thought which is unlikely to allow Moffat to rest easy in his bed. So it’s no surprise that ‘Aux Pieds de la Nuit’ – worshipping “at the feet of the night” – references the hours of darkness, and horror writers Edgar Allan Poe and Shirley Jackson.

Created during ‘downtime’ in his tour with RM Hubbert, it’s one of an assortment of different projects the multi-instrumentalist has on the go at any one time.

“It started quite lo-fi, the whole thing was going to be on a cassette, but as I grew fonder if it I thought ‘why am I doing this myself, I should get someone to put it out’.”

And Melodic Records – who released his previous solo instrumental albums under his L. Pierre alias – immediately stepped in.

However, there are subtle differences between his alter-egos – “L.Pierre was old records and vinyl samples,” he explains, “just about all of it taken from charity shop LPs.”

The new release is more ‘off the shelf’ samples, of strings and sound effects. And crickets. “There’s not a lot of crickets in Glasgow,” Moffat smiles.

“They do both have a night-time feel,” he continues, comparing his two alter egos. “Nyx is Pierre’s sexy French cousin or something like that – they’re definitely related but had a different education shall we say, went to different schools.”

Moffat has been prolific since (and during) his time with Malcolm Midleton as one half of Arab Strap, seemingly making more music than the days have hours. “I have a hard drive full of stuff that no-one will ever hear,” he laughs. “I like to plan ahead too, I always have the next two or three albums planned, I like to keep busy.”

He reveals plans for a “sister” album to the new release, a spoken word effort based on his lucid dreaming. “Though I’m not sure anyone wants to hear what goes on in a middle-aged man’s head!”

Can we expect this post-watershed collection to appear as the next album?

“I’d thought we could broadcast it at night like we were tuning into your head,” he ponders, “hire an FM channel, but maybe to throw it away like that would be a bit daft.”

We’ve established he sleeps little, but does he never get time to relax?

“The thing is, music is relaxing to me,” he says, “something I really enjoy, writing songs and making music at home or in the studio isn’t really work to me – going out and playing live on tour and performing, that’s the hard work.”

And perhaps some more live work with his former bandmate – after all, arabstrap.scot states: ”Coming to a festival near you this summer”.

Moffat pauses. “That’s because Arab Strap haven’t changed it since 2017. Sheer laziness on our part – we should probably take that down!”

So, no more reunions, at least for the time being.

Instead, some well-deserved time at home, even if it won’t exactly be feet up.

“Apart from sexy dream albums I have a lot to plan…unfortunately my bank manager might have something to say about that!

“The only place to make money is touring,” Moffat explains. “Streaming is a disaster for any band the same level I’m at – completely unsustainable.”

“And with Brexit, who knows… I’ve not met a single musician ever who didn’t want to be in the EU, it’s an essential part of your livelihood and it can only get harder.”

I suggest that he considers a move into radio. He guffaws… “I thought you were going to say move… back in with my mum!

No, with everyone from Iggy Pop to Jarvis Cocker presenting nowadays on BBC 6music, surely room for a silver-tongued Scotsman.

He laughs again. “I’m not sure they’d have me!”

‘Aux Pieds de la Nuit’ is out on February 14th. More at melodic.co.uk.
This article originally appeared in the Falkirk Herald.